Problem with sens and x64 .exe and other issues

Hi, im trying to play some OSP again after years surprised to see there are still servers, decided to use your client and I have been facing some problems.

First, sens wise, i’ve put all of my sens and accel related values from QuakeLive into my cfg, and it doesn’t translate well. The sens feels too light, so too high, and when I do a fast movement, its like it sort of slows down, as if it was reversed or something. Very weird. I have in_mouse 2 in QL, I tried in here, and also tried 1 and -1, same thing.

I also changed cl_mouseAccelOffset to 0 which is what I use in QL. m_pitch and m_yaw values… I don’t think im missing anything.

Also there’s something wrong with the ioquake3.x86_64.exe file. When I use this one, the bind key for the console (the key at the left of the “1” key, so the default one) doesn’t work. Also the corners of the screen (I use cg_viewsize 90 to mimic my older smaller monitor) aren’t black, but a mess, it’s like clipping or something, as you can see here, there are remains of the menu, the cursor and the items i’ve picked up on the lower left, the chat is also stuck there and any other messages (like the screenshot messages): 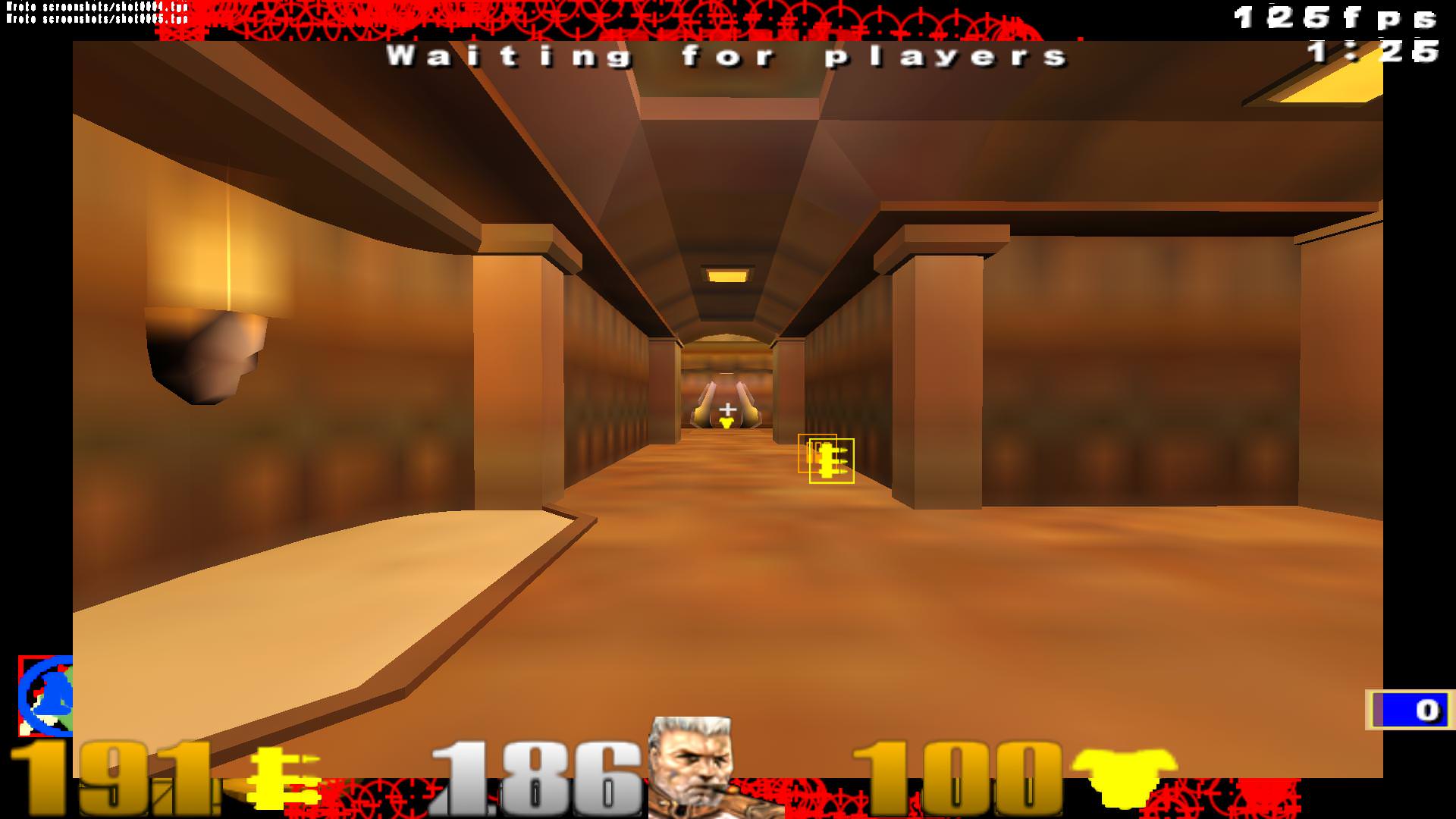 Actually none of my weapon binds are there, there are missing binds when I use x64…

Also for some reason, the ioquake3.x86_64.exe seems to give me the correct mouse feel as in QL, but unfortunately im having these issues.

Sorry, don’t know about QuakeLive sensitivity/accel. in_mouse 0 is disables mouse and any other value enables it. -1 and 2 just mean enabled to ioquake3.

Using key left of 1 to open console doesn’t work for all keyboard layouts. Use shift+esc to open the console or add another key to cl_consoleKeys cvar.

Yeah, viewport trim is broken in the (default) opengl2 renderer. Set r_postProcess to 0 or use the classic renderer by setting cl_renderer to opengl1 and then running vid_restart.

If the default number row weapon binds aren’t working it might be related to keyboard layout. Have you tried binding weapon controls through the menu? Or what are the exact binds that aren’t working?

For 16:9 widescreen field of view set cg_fov to 106. r_customaspect doesn’t do anything. I made a widescreen HUD mod if you want the HUD to be aspect correct, though it won’t be used when connected to pure servers. (The mod also includes ioquake3’s updated UI that displays more resolutions in the menu.)

Comparing my QL screenshot to my ioquake3 screenshot, the fov doesn’t seem to be the same, even if both screenshots are took at cg_fov 105 (which is the fov i’ve been using for like 10 years), at the exact same spawn, and ioquake3 is also set to the classic renderer now: 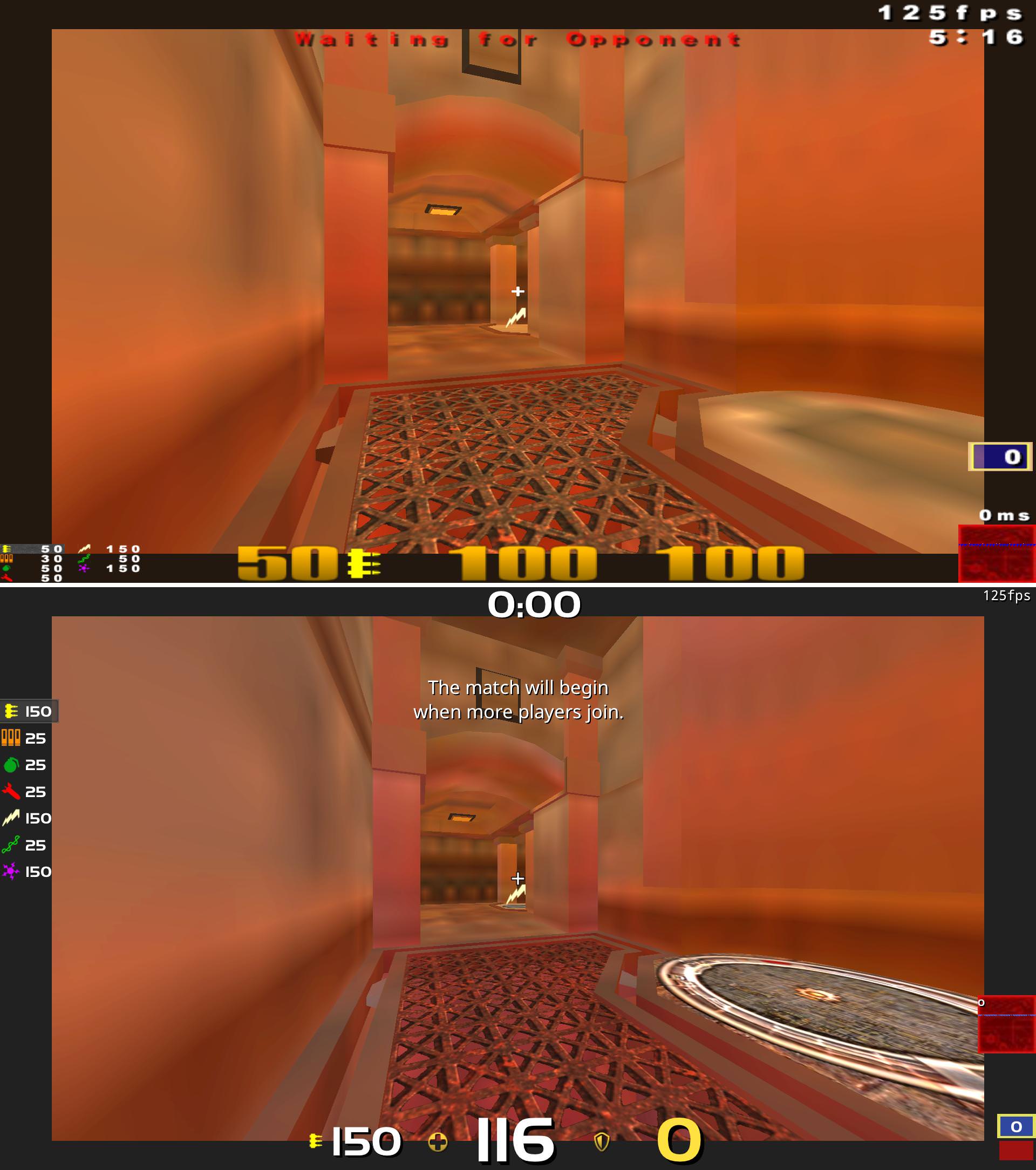 First screenshot is ioquake3 with OSP and below is QL.

Interesting how it just doesn’t match. The fov in QL seems higher, assuming aspect ratio is correct in ioquake3 which I doubt now. Something is definitely wrong.

About the console key, the console shows up with shift+ESC, but this is insanely annoying. Why does this only happen with the x64 .exe and it works fine with the 32bit ioquake3? How do I set the bind to work with the default console bind? im used to 15 years of making the console show up with the key next to 1.

I realized why binds dont work, because im using a vstr thing and these only worked with cpma.

The sens seems to be correct with ioquake3 x64

Another problem i’ve noticed is there seems to be some sort of sound clicking. I tried increasing com_soundmegs to 256, it still happens. Again this doesn’t happen with the x86 exe

It just seems there are many problems with the 64 bit exe, while the 32 bit exe works as intended, except the mouse feel is wrong and 64 bit gets it right.

It seems like your ioquake3 x86 is the 1.36 2009 release and x86_64 is a test build. Test builds use raw mouse input and better key layout support which inadvertently prevents using key left of 1 to open console in some cases (it’s a cursed key).

Set in_keyboardDebug to 1 and then press key left on 1. There should be a console message similar to:

Add the Q keyname (PAUSE) to end of cl_consoleKeys. (0x7e and 0x60 are Unicode character values which aren’t displayed by in_keyboardDebug.)

Seems to translate decent enough with fov 120. How do you calculate the correct fov to convert it to 16:9? just add 15 points to whatever fov you are using in QL?

Using a formula posted by Lordhavoc. There is a table of common 4:3 fov converted to other aspect ratios at quaddicted too.

If atan() and tan() take degrees

If atan() and tan() take radians

Oh wow I suck at math. I tried to do it with the windows calc and I just can’t get the 120 value (im trying with 105). I always had problems dealing with stuff like this, I didn’t knew in which order to do it.
I’ve tried using LordHavoc’s step by step guide and I just get a big number.

Also do you need to do this with cg_zoomfov value as well? if so, I would need it for fov 80.

I have found this link:

After comparing again with QL, it’s not exact… will post screens tomorrow.

Yeah, that calculator is correct. I think only 8 digits after the decimal point will affect rendering. I’m not completely sure. You can use as many as you want in the cvar though.

Something im also worried about is cheaters. Looks like servers no longer request original CD-keys. I’ve just used the old trick of filling “aaa…” characters as a cdkey and I can join any server I want. Also no server enforces PunkBuster anymore which was supposed to work against cheater… how to do some proper dueling guaranteeing no cheaters are on the server? anyone can recommend a proper server?

PS: With CPMA there is no problem. It let’s you use height and lenght values for crosshair so you can adjust it accordingly, also has higher def crosses. With OSP unfortunately we are stuck with the same crosses which get stretched in widescreen.

The CD key authentication server and PunkBuster support are no longer around and pure mode is easily circumvented. Just play and have fun. If you don’t like the players on a server then you can go to a different one.

Well, it’s difficult to have fun when potential cheaters are running around, and you can’t really know unless someone else is specting and sees something strange.